Nancy seeks to bring classical singing to everyone through her performances, offering a one-of-a-kind blend of traditional and contemporary styles.

Possessing a uniquely dynamic and emotive voice, Nancy imbues every song she performs with beauty and elegance. Whether performing at a paid event or singing on the streets of London, she is capable of moving the audience to tears – as many of her clients will gladly testify.

Having begun singing at the age of 9, after school at age 18 she went on to train at the Royal Northern College of Music under the guidance of internationally renowned musical professionals.

With her versatility and ability to combine the old with the new, Nancy has helped countless people get in touch with a style of music that speaks directly to the soul. She also wishes to inspire the younger generation to embrace classical music and find their voice through teaching singing.

Nancy desires her music to be heard by a wider audience. By street performing and singing  in various public venues around London, Nancy introduces members of the public to the sound of opera and well-known classical favourites in everyday situations.

Nancy’s versatility as a singer and performer allows her to grace any style of performance with her distinctive sound. A staple of Nancy’s performance is explaining the meaning of classical pieces sung in French or Italian, breaking down the barriers between her art and her audience.

Nancy continues to perform at high-profile functions, including at a seasonal launch party for fashion magazine Protagonist in London, dinners including parliamentary events and a party attended by a member of the royal family. Nancy also takes part in performances for charity on a regular basis – these have included a Great Ormond Street Hospital charity auction and war memorial events. Nancy was humbled to be asked to perform at the Grenfell memorial service in 2018 and the following two years since, which was broadcast live on the BBC.

Last year Nancy recorded a CD and put on three of her own sell out concerts with musicians. This year Nancy was set to go on a tour around the UK, but due to Covid-19 all tour dates were cancelled. Nancy continues to sing and started putting on her own online weekly concerts and is currently working on a new CD with a slight twist being released soon

What a delight! Nancy blended her engaging and sparkling personality with incredible professionalism in performing many songs covering a variety of tastes - in fact - a song for everyone.
Bendlowe’s Group at Shalford Village Hall

I just wanted to say that I stood and listened to you for a while today at Waterloo. You have an amazing voice and are clearly highly trained. It’s performers like you that make living and working in London worthwhile

Our guests were absolutely blown away by her talent and professionalism and we cannot praise this beautiful and talented singer enough…you will not be disappointed.

Nancy’s phenomenal voice not only captured our cyclist and supporters but everyone visiting Cutty Sark that day.

We were so privileged to have her support our charity. This young lady is a true star that needs more recognition not only in the U.K. but all over the world.

It’s strange when you witness a voice so beautiful that you find yourself fighting back the tears at a busy London train station. Though, I must admit that the bloke standing next to me was having the same dilemma.

I was transfixed by the power of her voice, her beauty and the renditions she gave. Thank you Nancy for making my day.

Your voice is so divine! Thank you for sharing it!
Your singing was a really lovely and quite serene end to a very busy day. Best wishes – and keep on singing, you were obviously born to do it!
When you meet Nancy there is no doubt that she is beautiful inside and out, then comes this monster of a voice with incredible range which has on occasion left people in tears.
From her fabulously powerful voice, to the on-stage-story-telling and self-deprecating wit, she is a gift and inspiration. The audience was in turns delighted at a Disney medley, then transfixed through the Saint-Saëns aria ‘My heart opens itself to your voice’. Because that is literally what happened. Amazing talent. Never miss a chance to hear her
I was not sure what to expect, but the moment Nancy began to sing the hair on the back of my neck tingled. Nancy has an incredible voice, and it all appears so effortless. Wow! The whole evening was so beautifully presented. 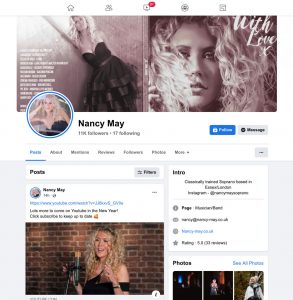